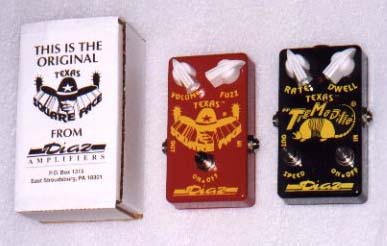 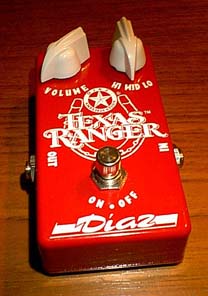 Sorry pedals are not available through us now, but you can get them elsewhere I think. Here is some info on Cesar and his pedals:

Based on the DALLAS RANGEMASTER treble booster, as used by Clapton in the Bluesbreakers, Rory Gallagher, Brian May and Tony Iommi. This booster adds treble and gain, and Cesar added a HI/MID/LO switch to choose an EQ setting which the original pedal did not have.

This is a sort of 3 position boost (Hi,Mid,Low) with a VERY interactive gain control.On the "HI" setting, I found that a Rickenbacker 12-string with lots of compression gets that perfect Vox treble boost sound that McGuinn employed on the Byrds stuff. The "Low" setting really adds girth to a Srat for a very big ,"Hendrixy" effect.Those looking for that type of flexibility in a pedal should just go buy it.Today.Everything seems to benefit from being run through it. A wonderful addition to your signal chain-whatever you play!

The Texas Square face was originally designed as a replacement for Stevie Ray Vaughn's fuzz faces, which were always dying. Cesar built his circuit into one of SRVs dead fuzz face boxes and Stevie used it until his unfortunate death.

The square face is similar to the Dallas Arbiter Fuzzface, has Volume and Fuzz knobs, but comes in a small MXR distortion+ sized box. They have a DPDT switch for true bypass. Here is some info from Cesar :

The square face is NPN not PNP..it comes with two germaniums but it has transistor sockets and two silicons are included for more gain. They can also be combined, for different tones. Changing positions will also help!! You can really hear it on the SRV album "IN STEP"...cesar...

They are now powdercoated instead of painted, which is stronger and looks better. Also the inside is coated so it should not corrode.

The Tremodillo is the world's biggest little tremolo box!

Keyboard Magazine (Dec-97) called the Tremodillo : a lush-sounding pedal whose tone rivals the best vintage amps. They said it was the best non-tube simulation they have heard.

Used by many artists :
Pearl Jam (the band) has it listed in their web page!
It has been used on top ten hits by Joan Osbourn, What if God was one of us, R.E.M's crush, Collective Soul December, countless ATT commercials, and ZZ Tops last few albums, rythm, etc. Not true bypass, as it works like an old Fender amp tremolo, when ON it cuts the signal in pulses for the tremolo effect.

The Texas Tremodillo price is $225.

This tape from 1992 reveals much of what is needed to be or become a guitar tech. The information is also useful for anyone who works on (or has someone work on) guitars or amps. He shows many "secrets" of the business.

The tape has a very warm quality, and I found out why - it was all filmed on 16mm by Leonard Eisenberg (who took those great shots of Hendrix at Woodstock), so it is like watching a movie. The scenes in the hills of Pennsylvania with Cesar are a treat to watch. The music on the video features guitar by Cesar.

This 60 minute video covers the following :

Tapes are $30 plus $3 priority mail shipping.

I got this email in summer 2005, thought I should share it.

I was re-reading your Cesar Diaz pages the other day and I wanted to tell about the time I met him in 1996, my band at the time was touring with Collective Soul as an opening act and Cesar came to the show at Duke University in N.C. He brought his amps because Ed wanted to buy one, I didn't know who he was at the time but he was very nice to me and talked to me for awhile about amps and tone and asked me if I wanted to try out the amps. I told him I didn't have any money and he said to try them out anyway, I liked the 40W that was based loosely on the Bluesbreaker combo, we plugged my Marshall 4X12 into the extension speaker jack and miked up both of them through the PA during sound check, Cesar went out in front of the house to hear it though the PA (we played in the basketball gym), he said it sounded like the tone on Physical Graffiti, I was using my 66' SG and a Ernie Ball volume pedal and that's it, I remember being real excited because I'm a huge Page fan, he asked if I wanted to use it for the show, so I used it and it sounded great cranking through that big PA, after the show he gave me his card and told me he would give me an artist discount, I left the band later that year and they were dropped after that, I never had the money or I would have bought one for sure, I still have his card in my junk drawer at home.

I met a lot of people at that time in my life, some were like Cesar, who would go out their way to be cool and help me, and some who wouldn't give me the time of day because I wasn't famous. I'll always remember him.

Link to my Cesar Diaz benefit concert page that was held December 21st, 1998 in NYC.

Link back to the aNaLoG.MaN main page